Swarm conjunctions above the auroral oval

Swarm conjunctions above the auroral oval¶

Introduction The different orbital velocities of Swarm upper and lower satellites makes possible a spacecraft alignment at certain orbital phase every other ~ 6.2 days. During such a time-interval, one can count several conjunction above the auroral oval (AO), depending on how strictly we require the satellite to line up. This notebook helps finding Swarm conjunctions above the AO, i.e. candidate events for the application of three-sat field-aligned current (FAC) density estimation method (see Vogt, Albert, and Marghitu, 2009).

The approach relies on an automatic procedure to identify the AO based on the unsigned FAC density in quasi-dipole coordinates interpreted as a normalized probability density function (pdf). Conjunctions are found by imposing temporal and spatial conditions (e.g. Swarm B and Swarm A/C to encounter an AO within a certain time-window, moving in the same hemisphere on the same upward/downward leg)

In the Input parameters section, the user could specify the time interval to search for conjunctions and the parameter that temporally constrains the conjunction. The spatial constraints are discussed in section Definition of s/c conjunction and could be changed by the user according to specific needs.

Since the automatic identification of AO location is not expected to work accurately in all cases, the list of events serves only for orientation. The standard plots generated at the end of the notebook are designed to help in (visually) assessing the quality of the conjunctions. Other requirements and critical aspects related to the application of three-sat method in the Swarm context (longitudinal separation, linear field variation, orientation of the spacecraft plane etc) are discussed in Blagau and Vogt, 2019.

Computes the parameters of a low-pass Butterworth filter, if one decides to filter the data


The function below splits a larger DataFrame in many smaller DataFrames, each corresponding to a certain time-interval. Used to split the Swarm data in half- or quarter-orbits.
For an orbital section with monotonic variation in quasi-dipole latitude (QDLat), the function below finds the instance of time when the cumulative sum of unsigned FAC density (i.e. absolute value of current density) reaches its half maximum. This is returned as proxy for the FAC central time, together with other parameters like e.q. qd_trend (positive/ negative when QDLat is increasing/ decreasing), and qd_sign (indicates the upper/ lower hemisphere). The integration/ cumulative summing is performed as function of QDLat (not time), to correct for the non-linear changes in QDLat at the highest latitude.
The function below is used only during the plotting part. Calls viresclient and provides magnetic field perturbation (in NEC or GEOC frame) for a specified time interval.

Sets the time interval to search for Swarm conjunctions above the auroral oval. These occur in consecutive orbits every approx. 6 days. The magnetic field model(s) used to derive the magnetic field perturbation (shown in the standard plots) is also specified.

Uses viresclient to retrieve Swarm Level 2 single-sat. FAC data as well as auxiliary parameters, i.e. quasi-dipole latitude / longitude (QDLat / QDLon) and the magnetic local time (MLT) at spacecraft position.
For each satellite, the script downloads data corresponding to the full consecutive orbits that completely cover the original time-interval (i.e. a slightly larger interval is thus used) and stores it in the elements of dat_fac, which is a list of DataFrames objects. Note that: 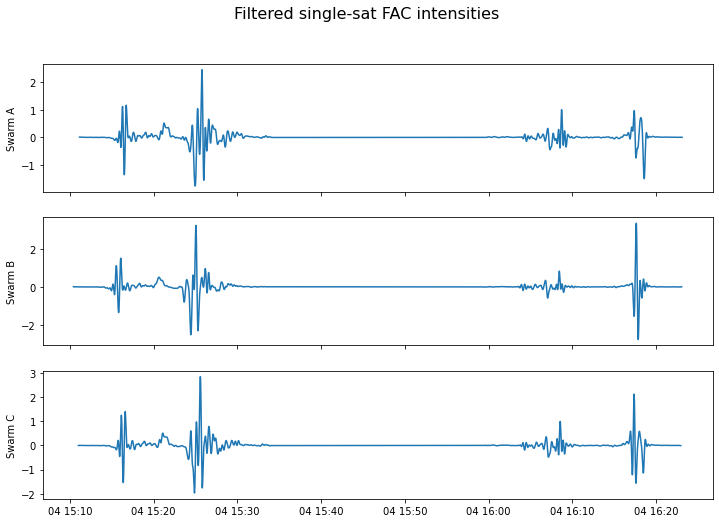 For each satellite, data is first split in half-orbit sections, corresponding to the Northern or Southern hemisphere. In the next stage, the half-orbit intervals are further split in quarter-orbits, using as separator the time instant when QDLat acquires its extreme value.
Then, for each quarter-orbit section, find_jabs_midcsum is called to estimate the central position of the auroral oval (approximated as the time when the cumulative sum of unsigned L2 FAC density reaches its half maximum). The function also returns the QDlat trend, sign, and value at central FAC for that quarter-orbit section.
After running the cell, the (three elements, i.e. one for each sat.) lists *_3sc contain np.arrays with FAC central times, QDlat trend, QDLat sign, QDLat value at central FAC, start and stop times for quarter-orbits when FAC intensity has value above the set threshold.

To define Swarm near-conjunctions, one condition should involve the values of auroral central times, i.e. timesX (X=[A, B, C]). In addition, depending on the particular study, one needs to impose conditions on other quantities, like sign and trend of QDLat or QDLon values at central FAC.

After running the cell, conj_tbl (list of three elements, i.e. one for each sat.) contains the indexes of quarter-orbit intervals when Swarm satellites were in near-conjunction. Results are listed and stored in an ASCII file as: timesB , timesB - timesA, timesB - timesC, QDLat and QDLon values for each sat. at central FAC.

Generates plots for the identified conjunctions, i.e. 10 minutes intervals centered on time instances listed above. The magnetic field perturbation in GEOC (obtained by calling get_db_data function) and (low-pass filtered) single-sat. FAC density data are plotted for each satellite. The auroral central times (i.e. Times[A,B,C]) and times when (unsigned) QDLat is maximum are indicated. The last three panels plot the magnetic field perturbation as a function of QDLat; QDLat values at central FAC is also indicated.
At the end, all the plots are collected in a multi-page pdf file. 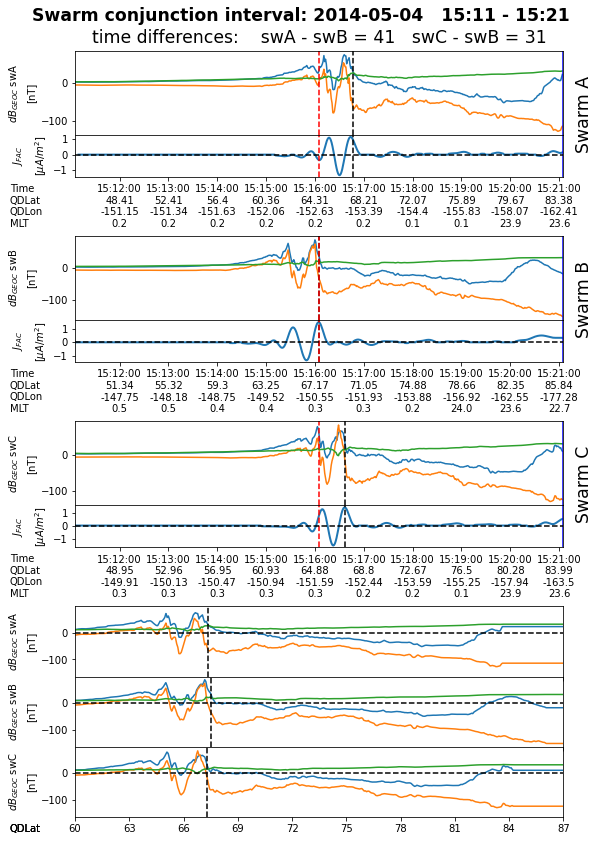 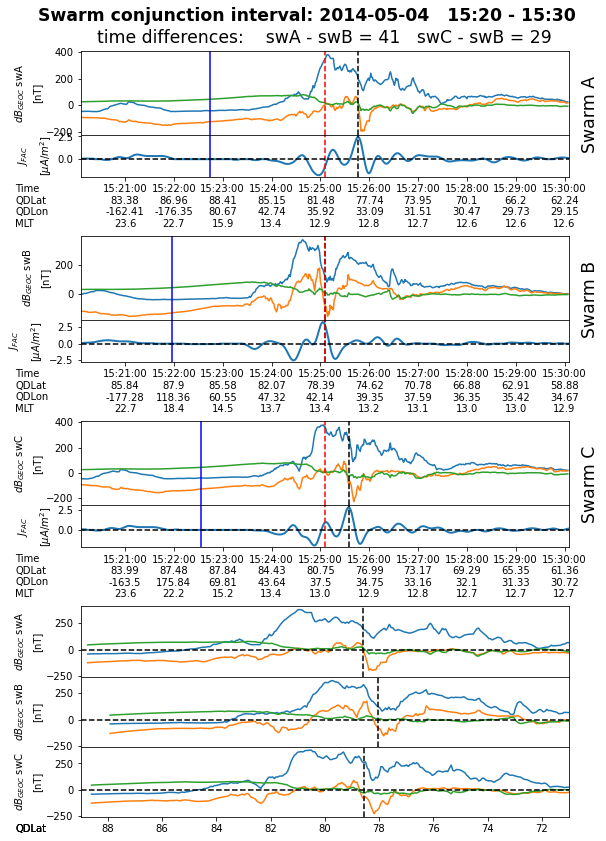 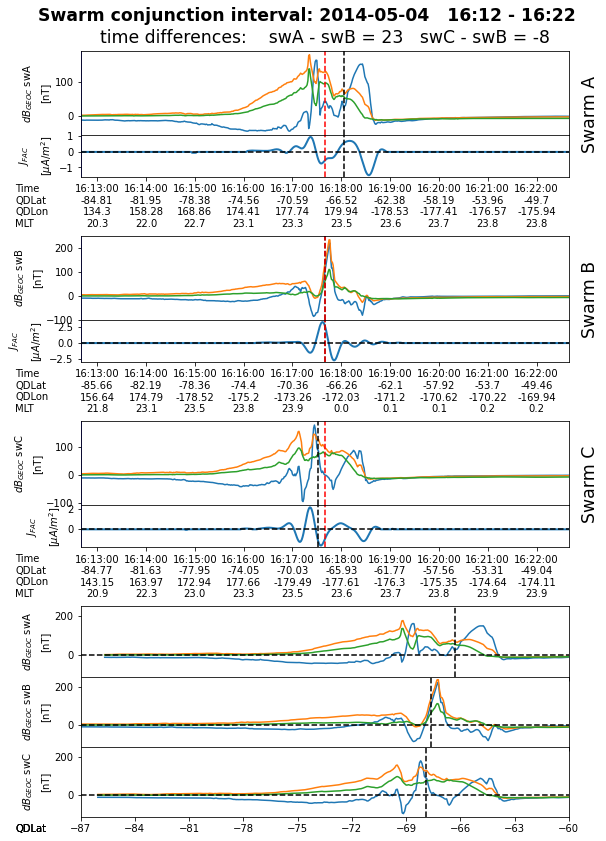