Four point planar configurations (quads) are formed by combining virtual satellite positions, separated along the orbit, and the the Ampère’s law, in the least-square (LS) formulation, is used to infer the current flowing through the quad. Then, the FAC density is estimated by considering the orientation of local magnetic field wrt quad normal. The LS approach has several advantages over the ESA L2 algorithm since it provides stabler solutions, can be applied on a more general spacecraft configuration, and offers a robust error estimation scheme. Consequently, the method provides significantly more data near the singularity where the satellites’ orbits intersect, allows FAC estimation with configurations that involves the upper Swarm satellite, or to fine tune the constellation geometry to the problem at hand. A detailed discussion on applying the LS dual-s/c method in the context of Swarm is provided in Blagau and Vogt, 2019.

In the Input parameters section, the user specifies the interval and the satellites used in the analysis, as well as the parameters that specify the quad configuration, i,e, the along track separation and the time shift needed to align the sensors. When the lower satellites are used, the later can actually be calculated from the orbital elements.

Computing the parameters of a low-pass Butterworth filter, if one decides to filter the data

Defining the recivec2s function, to compute the reciprocal vectors of a 4 point planar configuration. See Vogt et al., 2013 for details.

Specifying the time interval and the pair of satellites used in the analysis. To construct the quad configuration, one have to specify the time shift (tshift) needed to align the sensors, and the along-track separation (dt_along) between the quad’s corners. The time-shift can be explicitly set here or, when tshift is not defined, it’s optimal value is calculated from the orbital elements (works mainly for configurations based on the lower satellites).

To reduce the influence of local magnetic fluctuations, filtered data should be used. Bmodel designates the magnetic model used to calculate magnetic field perturbations. db represents the amplitude, in nT, of effective magnetic noise (instrumental error). angTHR is the threshold minimum value needed to recover the FAC density from the radial current density and errTHR is the accepted error level for the FAC density.

When tshift parameter is not defined, computes its optimal value. To that end, one founds the time difference in satellites’ ascending nodes and subsequently correct this value by taking into account the orbit inclination (i.e. 87.35 deg. for Swarm lower pair). This calculations works pretty accurate for configurations based on the lower satellites.

Introducing time shift between sensors. Keep only relevant data. To keep compatibility with the ESA FAC L2 product, the associated time stamps are those from the sensor shifted ahead, i.e. Swarm A.

Computing the FAC density and other parameters¶

Estimating the curl of magnetic field perturbation curlB. Associates its normal component curlBn with an electric current of density Jfac, flowing along the magnetic field line.
Computes the direction of (un-subtracted) local magnetic field Bunit and the orientation of spacecraft plane with respect to Bunit (cosBN and angBN).\ The current density along the radial (outward) direction Jrad is also computed. Its sign depends on the hemisphere.

The error errJ in FAC density due to (mutually uncorrelated and isotropic) instrumental noise δB is evaluated by considering a flat value of db nT.
Find (and exclude) data points / intervals when the value of the current density is not reliable estimated:
- when the quad becomes too stretched (close to the lopes) and errJ increases, defined as errJ grater than a threshold value set in errTHR. This affects both Jfac and Jrad
- when the B vector is too close to the spacecraft plane, i.e. below a threshold value set in angTHR. This situation affects only Jfac and is not encounter when the lower satellites pair is used.

Reading two-sat. FAC estimate from the ESA L2 product for a quick comparison.

Plotting and saving the results¶

The script below produces a plot, to be saved locally together with an ASCII file.
The generated plot presents:

The values for tick labels refer to the trailing position of the sensor shifted ahead.

On the bottom, the 4-point configuration is shown at three instances (i.e. beginning, middle, and end of the interval) projected on the NE plane of the local NEC coordinate frame tied to the mesocenter. The velocity vector of the mesocenter is also indicated. 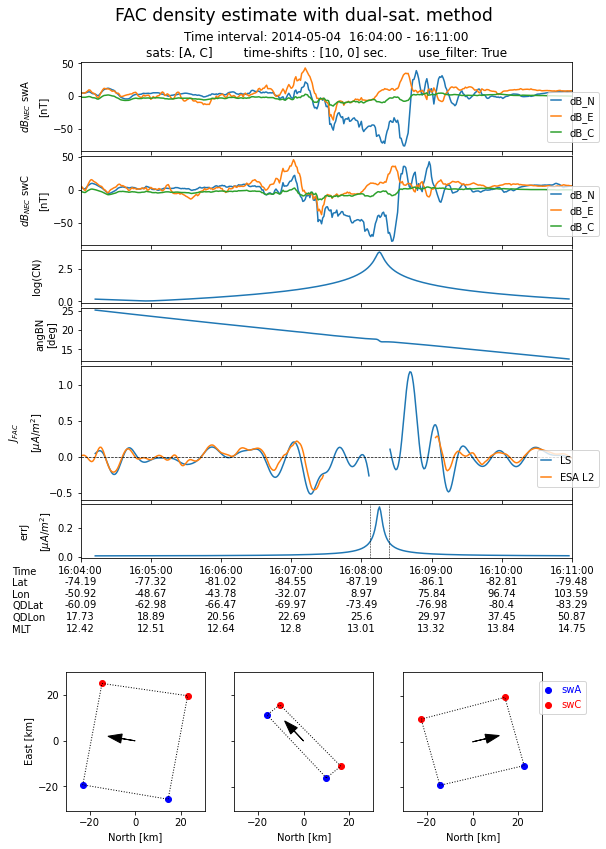