Introduction The notebook implements the algorithm of Minimum Variance Analysis (MVA) to estimate the planarity and orientation of Field Aligned Current (FAC) structures probed by the Swarm satellites. The FAC orientation can be later used to improve the FAC density estimated through the standard implementation of single-sat. method, that assumes only normal (i.e. oriented along the satellite velocity) current sheets.

The rough interval of analysis is provided by the used at the beginning; the notebook allows to inspect the data and, if needed, to refine the initial time interval. MVA is performed on the magnetic field perturbation projected on the plane perpendicular to the local average magnetic field direction. The ratio of the two eigenvalues provides an indication on the current sheet planarity while the eigenvector associated to the direction of minimum magnetic variance is associated with the current sheet orientation.

The algorithm was designed to work with low-resolution (LR) L1b data. In the LR files the missing data are marked by zero values on all magnetic field components; such points are excluded from the analysis, their value replaced by NaN, and the corresponding timetags printed on the screen.

The standard python libraries (numpy, pandas, matplotlib, …) are imported. Also, to easily follow the logical flow in the notebook, the functions listed below are read from the accompanying funcs_single_sat_MVA.py python script:

Function to perform the MVA on an array of 3D vectors. To do the analysis in a plane (e.g. perpendicular to the local average magnetic field), the normal to that plane cdir (3D vector) should be specified.

Function to manually select the analysis interval by dragging the mouse pointer on the screen.

As input parameters, the user specifies the time-interval and the satellite. To allow for a refined analysis, the algorithm actually downloads Swarm data recorded on a larger, i.e. half-orbit time span, and offers the possibility to modify the analysis interval specified below. To compute the magnetic field perturbation, the algorithm relies on CHAOS magnetic model(s), but the user can select another model available on the VirES platform.

Reads from VirES the sat. position (Rsph), magnetic L1b measurement (Bnec), and magnetic field model (Bmod). Auxiliary parameters QDLat, QDLon, and MLT, used when plotting the results, are retrieved as well. Time instances when the magnetic measurements assume zero values (indicative of data gaps in L1b low-resolution files) are replace by NaN. Computes the magnetic perturbation (in NEC) and, if no data gaps are present, applies a low-pass filter.

Computes the (Cartesian) position vector R, magnetic field B, and magnetic field perturbation dB in the GEOC frame. The un-filtered and, when possible, filtered current density, i.e. jb and respectively jb_flt, are computed to better assess the selection of MVA interval. Store quantities in DataFrame structures

The initial interval of analysis is indicated on a plot that presents the magnetic field perturbation and current density (when possible, the filtered current density is preferred). If the user wants to inspect the data he/she can zoom/pan both on x and y axes after clicking the ✥ button of the interactive window (displayed at the bottom). To select another interval for MVA, click again on the ✥ button, press left mouse button and drag to select a region in the top panel.

Updates the analysis interval if needed and applies the MVA in the plane perpendicular to the average magnetic field direction. The current sheet normal is provided by the eigenvector associated with the minimum magnetic variance, while the sense of direction is chosen according to the sat. velocity

Transforms the magnetic perturbation in the MVA (proper) frame. It also calculates the FAC inclination wrt sat. velocity in the tangential plane and corrects the FAC density estimation accordingly.

Plotting and saving the MVA results¶ 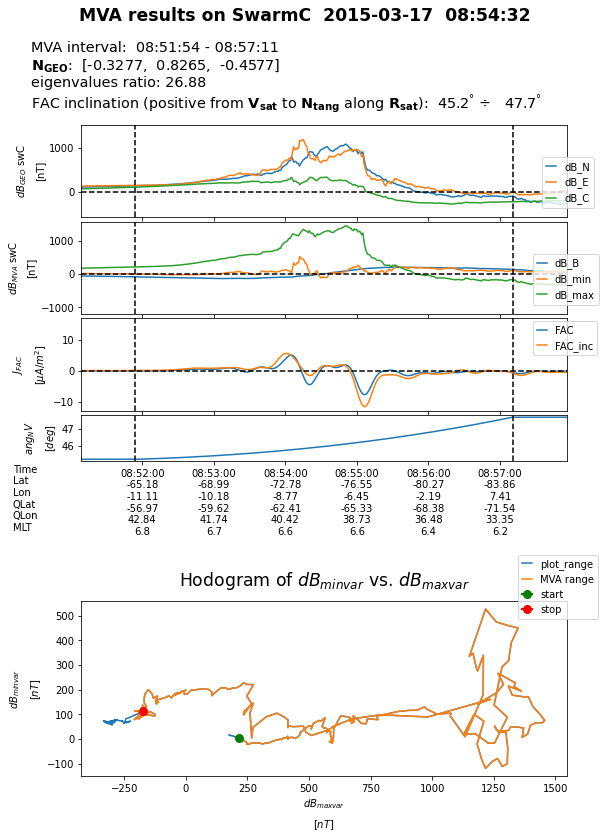